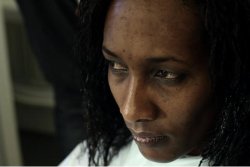 On a small, isolated island between Sicily and Africa, a film crew lands to shoot a large-scale feature film. The filmmaker and his entourage settle on the island, providing employment to the locals, but disrupting their bucolic daily rhythm. A large group of African immigrants are brought to the Island from Sicily, to work as extras on the film. The job requires that they get into the water and act out the part of refugees arriving by rickety boat, something most of them have actually experienced. [S]comparse is an abstract meditation on the day-to-day reality of immigration in a small community.

Antonio Tibaldi was born in Australia to an Italian father. He lives in New York. He has written and directed 5 fiction feature films in Canada, US and Italy: On My Own, Running Against, Little Boy Blue, Claudine's Return, Lupomannaro. In 2004, he started collaborating with the United Nations' Department of Public Information, by shooting documentaries and shedding light on some of the world's most under-reported realities. To produce these works he has traveled to Gabon, Algeria, Saudi Arabia, Indonesia, Singapore, China, Japan, South Korea, Mexico, Honduras, Guatemala, Colombia, Ecuador.

Director Antonio Tibaldi will be available for a Q&A after the screening.