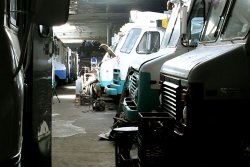 Ernesto Navarro has been living in the USA for 40 years. Since the 1980's, he's been working at an ice cream truck company in Williamsburg, Brooklyn. During the winter months, while the trucks hibernate, his memory of the past wakes up.

Having earned a bachelor's degree in Dramatic Art from the Escuela de Actores de Canarias, David Pantaleon currently combines his work as an actor in various theatre companies, with that of directing films and advertising spots from the independent company Los de Lito Films and from the international audiovisual collective IPP4 Films, with whom he has worked in cities such as Berlin, Wroclaw, Dortmund, New York and Budapest. His short films include Ciudad XXI, Apostasia, Perro Rojo, La Tumba, Fast Love, Gallos, Compania, and Vagy, among others.

Director David Pantaleon will be available for a Q&A after the screening.