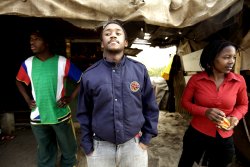 When the South African government promises to 'eradicate the slums' and begins to evict shack dwellers far outside the city, three friends who live in Durban's vast shantytowns refuse to be moved. Dear Mandela follows their journey from their shacks to the highest court in the land as they invoke Nelson Mandela's example and become leaders in a growing social movement. By turns inspiring, devastating and funny, the film offers a new perspective on the role that young people can play in political change and is a fascinating portrait of South Africa coming of age.

Filmmakers Dara Kell and Christopher Nizza will be available for a Q&A after the screening.