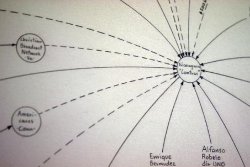 Brooklyn based artist Mark Lombardi created graphic artwork portraying the opaque global network of financial and political elites, including their ties to international terrorism. His masterpiece - "BCCI" - was investigated by the FBI after the attacks of September 11th, 2001. By that time, however, the artist was dead from an apparent suicide one year earlier, just as his career was reaching new heights. "Mark Lombardi: Death-Defying Acts of Art and Conspiracy" investigates an artist whose works transformed contemporary power structures into visual art and whose death left many questions regarding this system's intentions and breadth.

Mareike Wegener was born in 1983 in Borken, Germany, and studied film at the Cologne Academy of Media Arts. In 2008, she gained a diploma with distinction for her full-length documentary film Al Hansen -- The Matchstick Traveller. During her studies, she won a scholarship in 2007 to New School, New York. There she studied documentary media studies, under Oscar award-winner Cynthia Wade, among others. Since 2008, Wegener has worked as a freelance author, director and film editor. Her project Mark Lombardi -- Kunst und Konspiration was awarded the Gerd-Ruge scholarship in 2009. Since 2011, Mareike Wegener has also been studying philosophy at the European Graduate School in Switzerland.