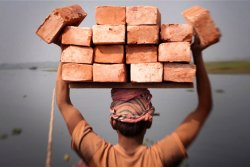 A reflection on modernity and global development, documenting the use of human physical force to perform work in the 21st century. The film takes place in the capital of Bangladesh, where the 'machine men' execute different physical works, a mass of millions of people who become the driving force behind the city.

Alfonso Moral and Roser Corella have collaborated on a number of documentaries, shooting in Lebanon, Mozambique, Bangladesh, Kenya and Senegal. They combine this joint work with individual work, making photo and video reports for different media, television and press, including Catalan TV, La Vanguardia or Le Monde. "Machine Man" is their first auteur documentary.