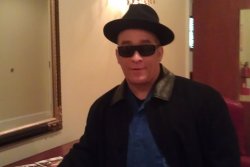 A glimpse into the past and present lives of David McClain, an ex-gangster from New York City who carries the heavy scars of his past.

Jeff M. Giordano was a poet and experimental musician before becoming an award-winning filmmaker. He graduated from the University of North Carolina: School of the Arts - Film School, with a focus on film directing. Before attending film school, Giordano studied psychology for two years at Ursinus College. He is the founder and curator for a bi-monthly Film Screening Series in Williamstown, New Jersey. Currently, Giordano is in production on a full-length documentary about the life of David McClain. He has known David McClain for the past 6 years.

Director Jeff M. Giordano will be available for a Q&A after the screening.