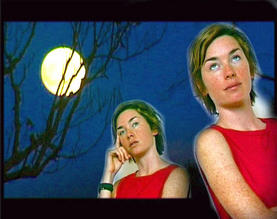 Twenty years of sexual-sentimental adventures of a woman accompanied by hits from the 70's to the present. One protagonist, whose story is told in the first person by eleven different women. From suburbs to the city, from tattoos & psychedelic paraphernalia to piercings & cell phones in search of the right man. After a series of encounters/confrontations with men who all seem to possess a similar trait - that of not being right for her- the protagonist has nothing to lose: why not give women a try?

Giovanna Sonnino was born in Catania (Sicily), is graduated in Art History and has a degree in cinematography. She has directed numerous documentaries for the RAI (Italy). She directed 2 movies. She directed and produced various independent videos. She is also a photographer and has exhibited her works in several personal and collective shows.

Experimental docu-fiction about twenty years of male-female relationships. A written script that is recited by 11 different women in New York and accompanied by hits from the relevant periods. A quick course in 'What does the woman want?' for all men.