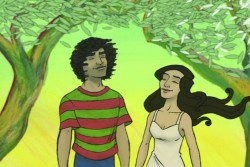 They were young, talented and free in New York. Dorit Rabinyan was an Israeli novelist and Hasan Hourani was a Palestinian artist. Their passionate friendship, impossible at home, flourished abroad. Then, in 2003 while visiting his family, Hourani drowned in Jaffa. Inspired by Dorit's 2003 article 'The Exile's Return' and Hasan's illustrated children's book 'Hasan Everywhere', this film contrasts the lonely voice of the writer with the warm, imaginative landscapes of the artist.

Andrew Kavanagh was born in Dublin in 1973. He made his first short film at 18 and has been involved in filmmaking and television production since 1995. In 1998 he received his first commission from the Irish Film Board for 'From An Evil Cradling'. Further commissions arrived in 2000 'The Milliner' and 'When Bridie Called Gerry'(2002), 'The Depository' (2003). More recently Andrew is creator and executive producer of two children's television series; 'Garth and Bev', (26 x 11', RTE, Cbeebies) and 'So Mortified' (52 x 11' , TVLoonland)