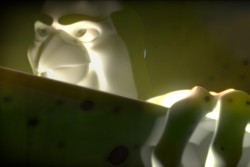 Hircine Airlines is a story about the greed of a corporate aristocracy, and the delusion and chilling isolation it ultimately brings to its most elite. Except that it's told with dancing birds. And lots of planes fly around and stuff.

Created entirely by the hand of Benjamin Hendricks, it took a staggering amount of time and spanned many classic seasons of Judge Judy. Software used includes Autodesk Maya, The Foundry's Nuke, and Adobe After Effects. The film is entirely CG.