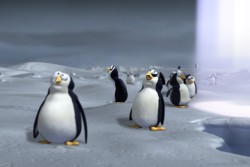 A mock animated documentary about the ecological plight of penguins in the Antarctic, possibly foretelling cataclysmic results for the rest of the world.