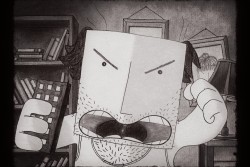 Yulia suddenly vanishes out of her kitchen. She finds herself in a closed room with five levers fixed to the wall. By setting them in motion, she starts off a series of absurd events that will lead her to finding her soul mate.

Antoine Arditti was born in 1979 in Paris. At 18 he started a foundation year at the Graphism school, ESAG. He went on to study animation for four years at Supinfocom. In 2003 he made "Le Faux Pli" as part of his course, which was selected at the Annecy 2003 and awarded a prize at Imagina in Monaco in the same year. From 2003 to 2007 he worked as a freelance designer and director on commercials and TV shows credits. In 2008 he started to make "Yulia".