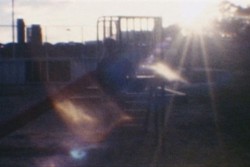 Moments in our lives that seem insignificant at the time they occur can stay with us for years, if not forever. We are haunted by what could have been, what small differences may have changed the outcome of these moments and maybe our entire lives. Lucky Girl recalls one such moment - a moment that was simple but could have turned out very differently.

Alexandra Grimanis completed her studies in film production at Concordia University in 1997. She is co-founder of the production company Stone Lily Pictures and independent filmmaker, director of films such as Mothers of me (1999), Blue Grass Stars Baby (2004), RH Factor (co-directed with Steven Woloshen) (2007) and Lucky Girl (2009). She has worked at Main Film, an artist-run center for independent filmmakers in Montreal.

Filmmaker Alexandra Grimanis will be available for Q&A after the June 13th screening.