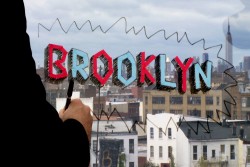 Bushwick, Brooklyn: Artist D. Billy walks the streets looking to "activate" and animate the decayed urban streetscape with flourishes of colorful tape and experimental graffiti. To most, an old A/C unit is an eyesore, but to D. Billy, that A/C unit is begging to be given new life as a cartoon TV screen.

Brandon Bloch is a lifelong visual artist who's spent most of the last decade focusing on film and video. Making films is his day job, night job, and sometimes weekend job. He has created a series of profile documentaries focused on emerging DC artists and has also produced a national series on emerging artists for Current TV. He currently is a documentary filmmaker at the Department of State in Washington, DC.

This short experimental documentary was shot in Brooklyn and completed in January 2009. Inspired by their subject, the filmmakers challenged themselves to create titling and graphic effects without digital tools... only relying on analog techniques. The film seeks to give the audience insight into the imagination of an artist and follow him through his artistic process.

Brandon Bloch and Josh Solomon will be available for Q&A after the June 6th screening.