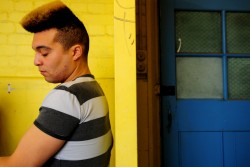 A young homeless girl is taken into care. Set in an urban wilderness, this film is an offbeat and touching experimental drama about East London kids.

Alex Taylor is a musician and composer who changed career in 2009 to direct his first short movie, KIDS MIGHT FLY, which won the Jury Prize from Film London, the Special Jury Award at SXSW, and several awards in Europe. He was shortlisted as a writer for Kevin Spacey's New Voices award in 2009. He is currently in preproduction on his next short THEY CAME FROM THE MOUNTAINS, about Eastern European girls performing exorcisms on Londoners, and is writing his first two feature films: 'BOLDO' about the first Roma Gypsy astronaut, and OTAKU about Manga-obsessed teenagers adventuring across London.

Director Alex Taylor will be available for Q&A after the screenings.