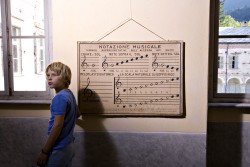 Summer 1978. Andrea, seven years old, is in the countryside with his mom and brothers who attend a music school directed by a somber Japanese teacher. One morning his mom, bewitched by the severe teacher, doesn't wake him up in order for him to go buy some fishing hooks...a short adventure follows.

Roberto Zibetti is an Italian actor, though born in Summit, N.J.. His work as an actor includes many feature films (including Bernardo Bertolucci's Stealing beauty), as well as many plays (directed, among the rest, by Giorgio Strehler, Luca Ronconi, K.M. Grüber). He's appeared in several tv shows for the italian tv. Also he's the founder of 'O Zoo Nõ, theatre and film production company, based in Torino, for which he has dirtected two plays.