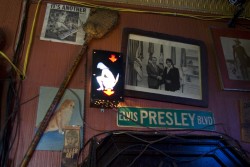 Freddy's Bar & Backroom was a thriving cultural hub situated in Prospect Heights, Brooklyn. Open since prohibition, the bar featured a unique and colorful history. This documentary chronicles the diverse set of characters in Freddy's community - the bartenders, the regulars, the artists and the musicians. Through their barside reflections, both hilarious and poignant, we see the true importance of this Brooklyn institution. Beyond the late nights and naked Mondays, Freddy's was a vital part of the neighborhood. Unfortunately, it also sat in the footprint of a controversial real estate deal that has threatened to radically transform Brooklyn's character.

Vicente Rodriguez Ortega was born in Madrid, Spain. He has a PhD in Cinema Studies from NYU and he has taught in several colleges around the New York area including Brooklyn college, NYU and Vassar College. This is Vicente's first documentary.

Donald O'Finn and other members of Freddy's staff will be available for Q&A after the screening.