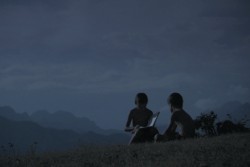 Zef Sokoli is the Bajraktar of the Dukagjin - "He Who Holds the Flag." He calls his men together with a rifle shot and leads them to war when someone threatens his mountain villages in Northern Albania. He still receives members of various tribes in the house of his ancestors, mediating between them when there are arguments - or yet another blood feud. But his kingdom is falling apart. More and more mountain people feel the call of the valleys. Even the Bajraktar's heirs, his three sons, are down in the city looking for work and a future. But one of them must inherit their father's legacy. It is tradition.

Philip Vogt studied for two years in Paris and Montpellier before he began his studies in the documentary section of the Munich Film Academy in 1999. During his studies, he has created five documentaries and has participated in numerous fiction and documentary films as director of photography, still photographer and sound recordist. Many of these productions have been awarded in national and international festivals. Since 2002 he has worked as a freelance director and director of photography beside his studies. "The Flag Bearer" is his final diploma film. Philip Vogt lives and works in Berlin.