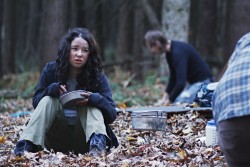 A young environmental activist finds her ideology tested in a forest on the verge of being clearcut.

Actress Sarah Steele will be available for Q&A after the screenings.