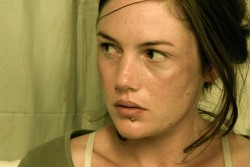 In the heart of a big city threatened by an impending danger, a man and a woman barricade themselves in a hotel room...

Born in Belgium in 1974, Antoine Duquesne studied cinema at the INRACI film school in Brussels. He has shot many short films as a cinematographer. In 2007, he co-directed "No Tomorrow" before shooting "The shelter" his first film in solo.

Director Antoine Duquesne will be available for Q&A after the screenings.