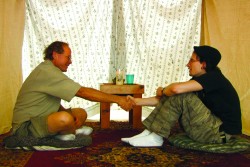 On Dan Taylor's first day out of prison he had nowhere to go, and faced one of the most important choices of his life: to return to his past of drug addiction or to try for something better. Through a chance encounter the next day, he met Derek, a young Christian anarchist, who invited him to move into a new and very unusual community in Brooklyn. Called "Our House," it was an alternative to the impersonal shelter system, providing the homeless a safe place where everyone lived communally (and illegally) in an abandoned Williamsburg warehouse. Besides a roof and healthy food, Dan also found new friends, a spiritual haven in a makeshift 'prayer tent,' and the hope of putting his life back together. But when the building is set for demolition to make way for luxury condos, Dan and the other residents must confront the inevitable end of their community and what that will mean for their futures.

Greg King has created numerous experimental films that have shown widely, such as with the Ann Arbor, Edinburgh, and Rooftop Film Festivals. He recently directed, shot and edited the dance film "chloes" (co-created with choreographer Lea Fulton), which premiered at the 2010 Dance on Camera Film Festival in New York. His film cycle "Rotating Mirror" received a Jerome Foundation Media Arts Grant. For twelve years he toured with the band "rachel's", and projected original films to accompany their live performances. He recently edited the documentary "The Fair Trade", and was an associate editor on the feature film "The Speed of Thought".

Greg King and David Teague will be available for Q&A after the screenings.