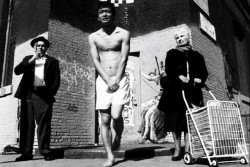 "Cold Noodles" is an absurdist black comedy. Events conspire against O, who has flagrantly tempted Fate by eating ramen on a fire escape in just his boxers. It is a bitterly cold day in Brooklyn and the wind slams his window shut, leaving him stranded. He scrambles down to the sidewalk, only to find every door and window locked. And then a body falls out of the sky.

The greatest feeling Kirsten Tan ever had was walking out of a cinema inspired by a film. This began her desire to create films. Her work has been screened in over 40 film festivals around the world and she has garnered several international prizes, including the "National Prize" at the Kodak Film Award; "Special Jury Prize" and the "Best Director" title at the Singapore International Film Festivals of 2006 and 2007 and most recently, "Best Cinematography" at Singapore Short Film Awards 2010. She is currently based in Brooklyn, New York where she is pursuing a Masters in Film Production at Tisch School of the Arts, NYU.

Actors Tokio Sasaki and Patricia Donohue will be available for Q&A after the screenings.