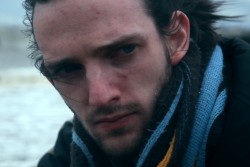 Alone in a factory, an engineer with a broken heart turns to his dispassionate machines in a desperate attempt to manufacture the piece to fill the gap left by his ex-girlfriend. Fixing a broken machine is not like fixing a broken human heart.

Cat Campbell-Berry and Jo Wallace are a female writing and directing duo. With a background in commercials, they decided to create something beyond the realm of 30 seconds. And with no pack-shot! Cat has previously produced a documentary set in Japan, and Jo shot a short film on super 8 (editing everything in camera), which was selected to screen in the Cannes Lions Festival '09.

Jo Wallace and Cat Campbell-Berry will be available for Q&A after the screenings.