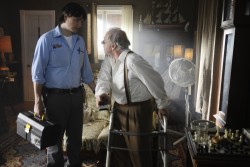 A cable guy is on a call to fix a television set with very strange problems. He soon realizes that the real problem lies with the content: war zones, famine, diseases, child kidnapping. He soon decides to embark on a most amazing adventure.

Simon Olivier Fecteau directed and played in his first films at the early age of 12. In 1999, he joined "Les Chick'n Swell", a comedy group, and created the eponymous TV show for which he won several awards. Then, he concentrated on filmmaking and shot the short films "Les derniers jours" and "Le pouce vert", both presented in many international film festivals. In 2007, he co-wrote and co-directed a feature film, "Bluff". While working on a second feature, he found time to write and direct "Le Technicien". He recently launched the successful web series "En audition avec Simon".