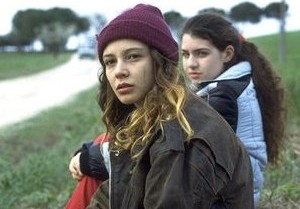 Sixteen year-old Olivia is a troubled youth. It's no surprise she comes from a dysfunctional family. Her father, Salvatore is violent and vulgar. He beats both Olivia and Franca, her mother. Franca feels life has never been good to her and she pulls through despondently working as a cleaning lady. Olivia, neglected by her family, lives like a little wild animal on the run. She hates school, she hates people, she hates the world. Thirteen year-old Lilly is Olivia's exact opposite. Lilly believes in fairy tales and worships "Grease"'s Olivia Newton-John. In fact, Lilly sees Olivia Newton-John as a role model and she diligently organizes weekly contests among peers and schoolmates dedicated to the blonde actress. Olivia and Lilly end up in the same class and soon become best friends. Lilly will try to save Olivia from her doomed fate, while Olivia finds Lilly's company a soothing tonic for her open wounds. The two girls will face many adventures and many mishaps in a world that is squalid and harsh. Finally, they decide to run away from it together. It is during this journey, taking flight and on the loose, that something will bind them forever and end their childhood.

Federica Martino majored in film at the New York University and since then has directed several shorts, documentaries and a movie. She wrote, directed and co-produced the short: "The Alameda Lovers" that won the Special Jury Prize at the Capalbio International Short film Festival and directed three documentaries. She has also worked on the film 'Needles Creek California" as a writer and director.