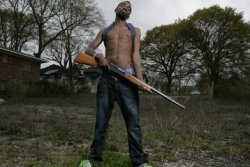 Snow On Tha Bluff tells the story of Atlanta robbery boy and crack dealer, Curtis Snow. When Curtis steals a video camera from some college kids in a dope deal, he gives the camera to his best friend, Pancho, and they start documenting their lives. At first it's business as usual for Curt. He robs dope boys, he runs from the cops, and he sells drugs, all while trying to provide for his baby momma and two-year-old son. But when one of the drug dealers he ripped off comes back for revenge, things in Curt's life start to spiral out of control. Through Curt's camera we get an unprecedented glimpse into the mayhem of life on the streets and into the criminal under-world of the infamous West Atlanta neighborhood, known as Tha Bluff.

One of the biggest costs of this production was keeping the cast, especially Curtis, out of jail. There were at least five instances when I had to bail Curt out, including the one time when he and I got arrested together. Luckily that didn't hold us up too much...and as time went on, we got better at running away from the police.

Director Damon Russell will be available for Q&A after the screening.