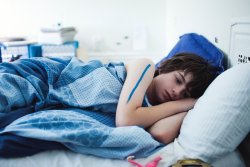 Thirteen year old Jesse wants to be an artist, but believes that his mundane middle class Toronto life has left him unprepared. After reading a book on what it takes to be a 'true-artist', he sets out looking for risk, ecstasy, wildness and women. Amy George is about the time in a boy's life when he's at his least likeable.

Yonah Lewis & Calvin Thomas are filmmakers and best buds. They become best buds while enrolled in film school and continued to be even after graduating in 2008. Since then they've devoted their time to the watching, writing and directing of films. Before Amy George they wrote six feature screenplays together, which means Amy George was their seventh. It is also the first production of one of their screenplays. C&Y intend to create as many movies as they can and are currently raising funds to turn Amy George into a play starring Kiefer Sutherland. The two hope to remain best buds and look forward to giving high fives to each other and making money.

Co-Directors Calvin Thomas & Yonah Lewis and composer Lev Lewis will be available for Q&A after the screening.