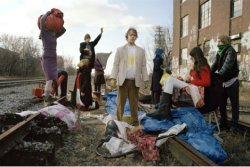 In this abandon space a "tableau vivant " takes place and proposes a portrait from nomadic inspiration : how the body becomes conveyor, but at the same time habitat. This short film is a wander within a suspended picture, a route within an imaginary community settled into the time of an image."

Native from Quebec city Jacynthe Carrier works mainly in photography and in video. Holder of a baccalauréat de l'Université du Québec à Montreal, she pursues right now an MFA at the University of Concordia.. Her artistic approach questions particularly our way of occupying and of altering the contemporary territory. Among others her work was presented during the Art biennial of Quebec city (2008), in the center of the photography VU (2009), to the center Caravanserail in Rimouski (2009) as well as to the Galerie de l'UQAM (2010). In 2009 she received Le Prix Videre Relève underlining the recent production of an artist of the emergent scene of the region of Quebec.