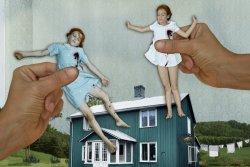 In a city named Franecker, there once was a father who slaughtered a pig, and his children watched. In the afternoon, when the children began playing, the sisters said to their brother: 'you be the little pig, and we'll be the butcher.'Then they took a shiny knife, as they had seen before, and a little bowl to catch the pig's blood so they could make sausages...

Michaela Mandel was born in Salzburg, Austria. She studied fine arts and cultural studies at the Art University in Linz (Austria) and at the Willem de Kooning Academy in Rotterdam (Netherlands). The Vienna-based Artist works international as a visual artist, as a filmmaker and also as a freelance designer and videomaker for theatre productions.

Director Michaela Mandel will be available for Q&A after the screening.