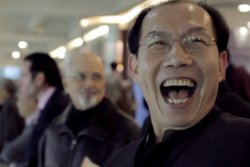 In Hong Kong and Macau four gamblers take us on a journey into the world of winners and losers created by a culture of speculation, addiction and debt. Gambling has long been part of Chinese life, but, with a society increasingly divided by rich and poor, an obsession with winning easy money has intensified, with more and more people pinning their hopes on games of luck and fortune.Through personal stories High/Low reveals an emotional search for belief and identity in money-centric modern China.

Jean-Louis Schuller was born in Luxembourg in 1979 and lives and works in London. He completed a BA in Cinematography at the Institut des Arts de Diffusion, Brussels in 2005 before moving to London, where he graduated from the MA course in Cinematography at the National Film and Television School (NFTS), London in 2008, after studying under Brian Tufano, Sean Bobbit and Billy Williams. Jean-Louis's first directing project, Chungking Dream (2009) was featured at Silver Docs festival, Washington DC; Sheffield DocFest and Clairmont-Ferrand short film festival amongst others. He also was recently commissioned to direct a seven-screen solo project for the Luxembourg Pavillion at the 2010 Shanghai Expo. As well as directing his own films, Jean-Louis also enjoys working as a DoP with other directors on drama, music videos and commercials. Recent projects include Chinese New Year (2010), directed by Anthony Chen; the Jonsí Go Live music tour (2010); KIN (2008), Brian Welsh's first feature; as well as work with the experimental collective Tell-No-One and artist Stuart Croft. Sam Blair was born in London in 1976 where he continues to live and work. His professional career began as a camera assistant, working on various feature and short films; as a researcher for BBC Radio; and, finally, as an editor, climaxing in a stint working for SHOWstudio. Shooting his first short documentary, Fish & Chips (2003), led to him being accepted into the UK's National Film and Television School where he mastered in Documentary Direction. His graduation film Sprinters (2008) was nominated for a Royal Television Society award and was featured at festivals across Europe, including Sheffield Doc/Fest; Visions Du Réel; Munich International Festival of Film Schools and EntreVues festival, as well as on Virgin in-flight entertainment. He has since worked closely with Jean-Louis Schuller, co-directing the short documentary, Chungking Dream (2009), which played at Clermont-Ferrand; SilverDocs and Sheffield Doc/Fest amongst others, and editing Schuller's seven-screen installation for the 2010 Shanghai Expo. Blair also directed his own gallery-based film Between You and Me (2010) after winning funding from the National Film and Television School and the Royal College of Art. Sam has directed films for Artangel and the Tate Gallery, created viral content and visuals for the record label Werk Discs and worked on films for Channel 4 and Spine TV.