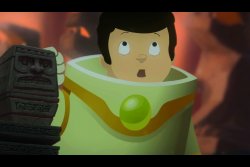 A regular night of dream delivering turns into a literal nightmare when an orphan's book of Ancient Aztec Mythology comes alive. The Dream Giver must save the orphan from his own nightmare!

After serving a two year religious mission, Tyler studied animation with an emphasis in illustration at Brigham Young University. During school, he interned at Walt Disney Animation Studios and Pixar Animation Studios where he worked on films such as: Bolt, Toy Story 3, Day & Night, Cars 2, and Brave. His work has been featured in the Society of Illustrators Student Competition as well as Illustrators of the Future. Dream Giver is Tyler's directorial debut.