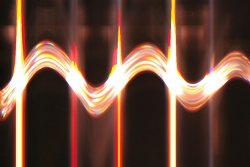 Over 3,000 images, shot entirely on a flatbed scanner, arranged into an avant-garde stop-motion film that explores the dynamic relationship between sight and sound.

Artist/Filmmaker Adam Badlotto discovered his passion for filmmaking by combining his his skills in graphic design and music. His first film, "Only in Dreams", is an abstract stop-motion short that was created using nothing but a flatbed scanner. It has screened in over 20 film festivals worldwide, winning awards from Ovation TV, the Festivus Film Festival and others. He recently collaborated with the band Young Circles on an experimental music video titled "Love Hitch", which is described as a psychedelic journey that visualizes the cognitive process of forgetting a lost love; an experience that represents the chemical reactions in our brains. "Love Hitch" took a year to develop and immediately gained recognition in the film and music scenes, premiering at the Festivus Film Festival, being featured by Alternative Press and screening at film and music festivals internationally. Adam is currently at work on an untitled abstract/narrative short film while doing freelance graphic design and video production.

Over 3,000 images were scanned into a computer to create a sequence of stop-motion animations. The images were not digitally manipulated in anyway. All of the materials used were found objects or scrap pieces of paper. My intent was to be as spontaneous as possible by not to using any traditional instruments, tools, or methods. None of the sequences were pre-orchestrated but were derived through experimentation. I was consistent with this theme when it came time to capture the audio for the work. Using a field recorder, I recorded random sounds such as a printer while it was printing, wind chimes outside my house, feedback from two telephones and an answering machine, silverware, and a running refrigerator. During a visit in New York I recorded noises and sounds from the subway system and street traffic. Sound wave editing software was then used to manipulate the pitch, tone, and volume of the sounds to match the dynamic activity of the imagery.