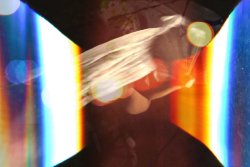 They say it takes only 8.2 seconds to fall in love...'Love Hitch' is a psychedelic journey that visualizes the cognitive process of forgetting a lost love; an experience that represents the chemical reactions in our brains.Inspired by the groundbreaking visual effects of films like '2001: A Space Odyssey', 'The Fountain' and 'Tree Of Life' and the works of video artists like William Kentridge, Chris Cunningham and Danny Perez, 'Love Hitch' was created over a year long process. It combines live footage shot from all over the United States as well as over 7,000 individual stop motion images that were animated on a flat bed scanner. None of the images seen in the film are computer-generated.

Artist/Filmmaker Adam Badlotto discovered his passion for filmmaking by combining his his skills in graphic design and music. His first film, "Only in Dreams", is an abstract stop-motion short that was created using nothing but a flatbed scanner. It has screened in over 20 film festivals worldwide, winning awards from Ovation TV, the Festivus Film Festival and others. He recently collaborated with the band Young Circles on an experimental music video titled "Love Hitch", which is described as a psychedelic journey that visualizes the cognitive process of forgetting a lost love; an experience that represents the chemical reactions in our brains. "Love Hitch" took a year to develop and immediately gained recognition in the film and music scenes, premiering at the Festivus Film Festival, being featured by Alternative Press and screening at film and music festivals internationally. Adam is currently at work on an untitled abstract/narrative short film while doing freelance graphic design and video production.