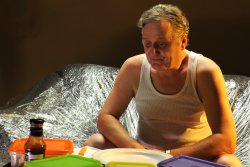 Paul, a door-to-door salesman, struggles - with a smile - to sell his food containers. In fact, his life resembles the preserved foods they hold: hermetically sealed off from the exterior world. One day, a singular event will force him to come out of his plastic box.

Alberto Meroni works as director and producer of commercials, documentaries, short films and television shows. He collaborate with other swiss authors such as Villi Hermann, Edo Bertoglio, Vito Robbiani, Michele Andreoli as cameraman and editor of their films, documentaries and reportages. His passion for cinema and television has born when he was very young, when still in elementary school he made his first movie with friends. Along the road, at sixteen, he receives a proposal of collaboration as operator for the broadcaster TeleTicino. Three years later begin to direct his works. In the 2003 he founded his own production company inmagine.ch cooperating with swiss and italian advertising agencies, production companies and other broadcasters. Since 2009 participates in teaching the technique of filming and editing at the Academy of Sciences Audiovisual (CISA), and gives courses at the University of Applied Sciences of Southern Switzerland (SUPSI).