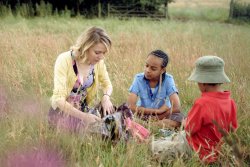 Two young brothers, both in temporary foster care, look forward to a picnic with Mum but the unexpected arrival of Mum's new boyfriend Greg, has unforeseen and dramatic consequences.What do the boys recognize in Greg that Mum can't? A chance event gives them an opportunity to solve the problem, but will they make the right decision?

Stuart Napier has over 20 years experience in television as an award winning documentary director and editor. Contributing to a wealth of programmes for BBC and other major broadcasters. As an editor Stuart has worked on high profile programmes in a variety of genres, from documentaries and dramas to music video. His skills have been recognised internationally, gaining a BAFTA nomination and winning the prestigious Wildscreen Festival Award for editing. One milestone of his early editing career was working with Peter Gabriel on the Grammy Award winning "Digging in the Dirt". His versatile skills allowed him to expand his horizons further by moving into directing. Various programmes followed for British broadcasters including directing "Vets in Practice" for primetime BBC1. Since 2002 Stuart has been more and more involved in creating documentaries from his own ideas and original material. He has won the Royal Television Society award for his documentary Wacky Racers and has been nominated for the West of England RTS on three separate occasions. Stuart has always had a strong interest in drama and the Digital Shorts strand, funded by South West Screen and the UK Film Council, has enabled him to create his first short film from an original story-"Little White Lies."

This is my first short dramatic film and is an atmospheric narrative , exploring themes of innocence and family. What lies beneath the surface in a relationship is explored in Little White Lies.