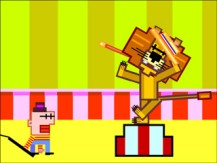 There an special interest that attempts to investigate how the limitations of the Internet -and the subsequent creation of programs destined to engage in a dialog with these limitations- can modify or re-organize the semantics of the animated cartoon. At the same time generating hybrid results which are halfway between the traditional animation and the printed comic, but can also take advantage of the narrative resources of both genres.

He studied Graphic Design in the same city and since then has developed his work in the artistic circle while combining it with teaching. As an artist, he has participated in collective and individual exhibitions in galleries and Museums throughout Caracas. Since 1995 he has been experimenting with the possibilities of achieving a way to make the notions of traditional art and mass media converge.