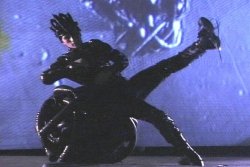 Discovering Senses is an SiFi-fairy tale put together in a form of video game. The protagonist travel trough levels. Each level is a symbol which contains Cosmic -Powers entities to which my characters are confronted with. They are imperfect creators of imperfect system who make numerous mistakes. First level is a cross and it symbolizes positivity and negativity. Second level is a triangle and it represents the ten levels of human consciousness trough which we go trough everyday. Third level is square and refers to differences of human lives as well as to four Cardinal points. By traveling trough them ,everyone searches for their luck. Fourth level is a circle, it symbolizes Eternity. The action takes a place somewhere in the Galaxy.

Biljana Biba Vickovic attended elementary and secondary school for design in Belgrade. In 1994 she graduated from the faculty of art and finished her MA in 1997. She lives and works as an independent artist in Belgrade.