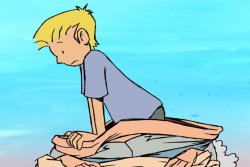 A young boy experiences a series of abstract transformations after drinking a mysterious green liquid. A diverse cast of characters twist and stretch their way out of one another forming a monumental pile. The boy then downs the liquid a second time which violently transforms him again, creating a torrent even more twisted than the first, but this time in reverse order.

Self taught animator Patrick Smith made his directorial debut in the stylistic MTV animated series "Down-town". He went on to direct several seasons of the popular series "Daria". Currently, Smith is working full time on independent films. His films have been featured on MTV, Spike and Mikes, Avoid Eye Contact (The best of NYC), and over a hundred other international film festivals. Today, the 32-year-old animator is writing his first feature, and animating his next independent short.