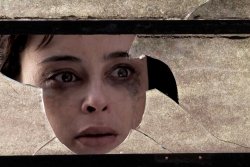 The sound of something falling, broken glass, a car alarm triggered. She runs down the stairs of the building and faces the scene. In desperation, she moves away, leaving in the background the bloody body of a man fallen onto a wrecked car. In a blood bank, she fearfully awaits for her time to donate. He appears in front of her. A ghost? A memory? The moment of the blood donation will reveal the pain and the challenges of the couple's separation.

Luciano Coelho is a director, cinematographer, screenwriter and editor from Curitiba, southern Brazil. He studied architecture and film direction at the EICTV (International Film and Television School of San Antonio de los Banos Cuba). He has directed over twenty short films and documentaries and is preparing to direct his first feature film, witch will be codirected by Fear of Blood's screenwriter Juliana Sanson.