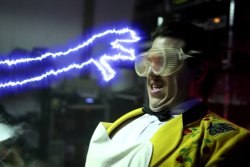 OTTO AND THE ELECTRIC EEL

In this modern adaptation of an Afro-Cuban Yoruba myth, Miami Bass legend Otto Von Schirach, playing the role of Chango the God of Thunder, battles to keep an inter-dimensional creature, the Serpent God Damballah, from ruining his dinner date.

Duncan Skiles began making movies at age 13 at the cable access station in his hometown of Fayetteville, Arkansas. In high school he hosted a live show/train wreck on Saturday night called BurritoVision. After graduating NYU he co-founded the internet-famous collective Waverly Films and made lots of shorts and music videos, including Chiddy Bang's "Opposite of Adults," which won an award from MTV for best video of 2010. He has directed two Comedy Central Specials for Reggie Watts. Currently he is co-writing The Fuzz, a puppet-cop series for Hulu slated to begin production Summer 2012.
Andrew Zuchero: