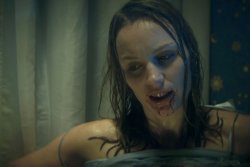 Endless is a supernatural horror short film telling the story of a 30-second siege in a bathroom. A woman takes a shower, alone in her apartment bathroom. Suddenly she finds herself confronted by a strange intruder who holds her and her family hostage. Soon a siege and battle of wits is locked into place which will have devastating consequences for everyone involved.

Matt Bloom is an award-winning film-maker from Manchester, England, and a graduate of the Newport Film School. Recent wins include Royal Television Society Best Drama award for film "On The Out". He was recently mentored by Moulin Rouge director Baz Luhrmann, and has directed TV dramas and adverts, and award-winning short films. He puts profits from his work back into producing short films, often in the sci-fi or comedy genre.