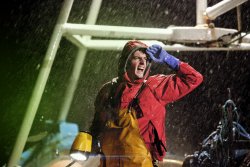 In the midst of a stormy night, on-board a rural Irish fishing trawler, a fisherman and his son witness a glowing object fall to sea. As they battle the elements to get it on deck, the father loses something very dear to him, and gains something utterly unexpected.

Mike Ahern & Enda Loughman direct together under the name D.A.D.D.Y. D.A.D.D.Y. started as a graphic design and animation collaboration, but they quickly moved on to direct both animated and live action short films, music videos, and TV commercials. Their music video work in particular has gathered a cult following both in Ireland and abroad. Mike & Enda have been invited to talk and showcase their work in the National Film Theatre in London, as well as to speak to filmmakers and designers in Copenhagen, Dublin, Limerick & Belfast. They have directed high profile music videos for many bands; more recently Bloc Party, Jape and Super Furry Animals. Along the way they have been nominated for the 'best new director' award at the UK Music Video awards in 2008 as well as D&AD award for their music video work. 2009 saw the release of Irish Film Board funded and awarding winning short film 'Mr. Foley' which Mike and Enda wrote and directed. Mr Foley has toured the festival circuit and picked up many awards along the way. The Hatch is their second short will premiere in November 2011 and they hope to start a new sub-genre, describing the film as a 'poetic sci-fi'. They are currently in development on their first feature film currently titled Bogman King.