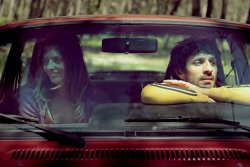 FRAGMENTS OF A STANDSTILL TRIP

An amazing journey through time and space for two lovers who had come to visit a forest: their childhood playground.

Having studied mathematics, Lionel Mougin discovered a penchant for storytelling, especially through his passion for comics. His experiences on film sets as a Stage Manager or Production Manager gave him the desire to pass his turn behind the camera. He then began writing short films while developing his talent as a director of actors that has proven itself in his first short film "Mobyl", which opened to him the doors of creative advertising. Lionel Mougin has now become a popular director in this area and has won awards at international festivals for his films Renault, Peugeot, Citroen, Nestle and Total.