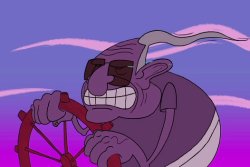 While visiting their friends, a heart specialist and his wife, Sid reluctantly accepts Dr. Dan's invitation to play tennis on his private court. Dan has a mid-game heart attack. Sid runs for Dan's wife who needs Sid's Bermuda shorts to cradle her husband's head while she administers CPR. Wearing only his Jockeys, Sid avoids being charged with murder, and even gets his shorts back!

Harry Teitelman grew up in Boston, MA, and studied film and animation at NYU's Tisch School of the Arts. He is a freelance animator living in Brooklyn, NY.

Shortly before my charismatic grandfather died, at 95, I recorded him telling some of his crazy stories. One of my favorites is a tragic tale which he recounted with his signature sardonic humor. I was inspired to animate Grandpa Sid, Grandma Hilda and what happened to them during their almost perfect sailing vacation on Cape Cod.

Director Harry Teitelman will be available for a Q&A after the screening.