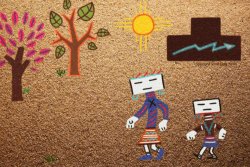 This animated film takes us on a hero's journey to the world of the Wolf Dog who answers some of life's greatest questions through a series of indigenous tales of animal wisdoms-teachings that the film's director learned as part of a colony of Spaniards living among the Native Americans of New Mexico for several hundred years. The animation was inspired by Navajo sand paintings-an ancient religious art form. An original technique for animating sand called "faux sand painting animation" was developed for this film, and the designs include authentic native symbols and Navajo sand. Performing music for Wolf Dog Tales is a member of the Taos Indian Pueblo of New Mexico, who emulates animal calls throughout the film using handmade flutes. At a time when we strive to live in balance with the earth, Wolf Dog Tales reminds us of the many things we can learn from animals.

Wolf Dog Tales is Bernadine Santistevan's first animated film - a labor of love that she created with Igor, an animator known for his innovative techniques and artistic designs. Bernadine was born and raised in a rural community in New Mexico where her family has lived for over 400 years after leaving Spain during the inquisition. The unique blend of her old, Cervantes-like Spanish culture and the Native American cultures of New Mexico is the inspiration for this film. Prior to becoming a filmmaker Bernadine worked in venture capital. She studied engineering at Stanford University and finance at the Wharton School of Business. She also studied in France, Mexico and Venezuela.

The film animator, Igor, and visual effects artist,Begonia Colomar, will be available for a Q&A after the June 5th screening.