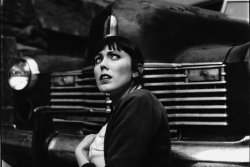 A woman on her way home becomes a victim of a strange infection. She soon realizes that an epidemic is spreading and there are larger forces at work. While struggling to find a cure she also discovers that desperate times require hard choices.

Erik Rosenlund works as an animator and filmmaker. He debuted as an illustrator and a cartoonist in his teens and shortly thereafter got his first commercial work. Since turning his attention to filmmaking, he has written, directed, produced and animated six short films that have all garnered widespread international acclaim and distribution. He has been picked twice for competition at the Cannes Film Festival; with Spegelbarn, nominated for a Golden Palm in the official short film section in 2007 and Måste, one of seven competing short films in The Critics' Week in 2003. In 2009 he directed his first live action film when the acted part of Out of Erasers was shot. It took one year of post-production work with animation, sound, and effects, to complete the film.

As a filmmaker I always look for new challenges. Shooting live-action for the first time was just such a challenge. Despite directing several animated films, I had never even been on a film shoot before stepping into this project as a director. But then again, I have always been a believer in learning by doing. Lack of experience in one area sometimes also means lack of perceived limitations within that medium when entering unknown territory. Out of Erasers (Sudd) was a daunting project right from the start. So many different pieces had to fit together to be able to pull it off. It was like making two films, first a live action film and then an animated film. And after that came the biggest challenge of all - to merge them into one film that could suspend reality and make it believable. However, the greatest challenge in this project was our ambition to create a film that was more than just a technical achievement - to create an intense emotional atmosphere and experience for the audience.