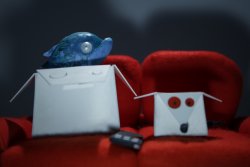 While his master falls asleep, the dog jumps on the sofa to watch TV, but it has to deal with its master's dreams...

Dadomani is a creative studio founded in Milan in October 2007 by four guys sharing the same passion for animation. Each brings his own skills, backgrounds and ideas that combine into one creative vision. They develop and manage projects in 360 degrees, from the initial idea up to the delivery of the finished product. Dadomani's clients include companies in advertising, film, and television. The team creates films for commercials, short films and short animated scenes using stop motion, live action, computer graphics, and traditional animation. A multidimensional creative studio, Dadomani is a dynamic and cohesive team working together to bring an original and fresh take on animation.