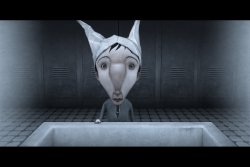 EDMOND WAS A DONKEY

Edmond is not like everybody else. A small, quiet man, Edmond has a wife who loves him and a job that he does extraordinarily well. He is, however, very aware that he is different. When his co-workers tease him by crowning him with a pair of donkey ears, he suddenly discovers his true nature. And though he comes to enjoy his new identity, an ever-widening chasm opens up between himself and others. Screenwriter and director Franck Dion's empathetic portrait of this sweet-natured individual illustrates the challenges of being true to oneself in a world filled with social conformists. Edmond just doesn't fit in: he's a donkey in a world of horses. People stare at him because of his strangeness, and are alternately curious, amused, embarrassed and uncomfortable. Since he can't bring himself to be what others expect, Edmond makes the only possible choice.

Franck Dion was born in Versailles in 1970 and has worked as an actor, theatre set designer and illustrator. In 1999, he launched the first version of his website, Les Voyages imaginaires de Franck Dion, which was awarded the Golden Net prize for best artistic website in 2001. In 2003, he made his first short animated film, L'Inventaire fantôme, which won the Youth Jury Award at the Annecy International Animation Film Festival, and was nominated for the Cartoon d'Or. In 2006, together with a few friends, he founded Papy3D, the company that produced his second film, Monsieur Cok (2008), selected for the Sundance Film Festival, and the winner of several awards. His third short film, Edmond Was a Donkey (2012), is the first film that Papy3D has co-produced with the National Film Board of Canada.