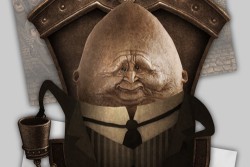 Mister Cok is the owner of a large bomb factory. Looking for efficiency and profit, he decides to replace his workers by sophisticated robots. The formers stare helplessly at the toil of the robotic labourers. But one of the formers does not accept being discarded so easily...

Franck Dion was born in Versailles in 1970 and has worked as an actor, theatre set designer and illustrator. In 1999, he launched the first version of his website, Les Voyages imaginaires de Franck Dion, which was awarded the Golden Net prize for best artistic website in 2001. In 2003, he made his first short animated film, L'Inventaire fantôme, which won the Youth Jury Award at the Annecy International Animation Film Festival, and was nominated for the Cartoon d'Or. In 2006, together with a few friends, he founded Papy3D, the company that produced his second film, Monsieur Cok (2008), selected for the Sundance Film Festival, and the winner of several awards. His third short film, Edmond Was a Donkey (2012), is the first film that Papy3D has co-produced with the National Film Board of Canada.