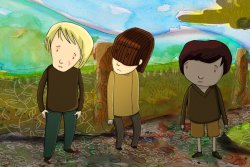 A dangerous children's game will disrupt the lives of a boy and his family forever.

Gregorio Muro was born in 1954 and is a cartoonist, screenwriter and film and TV director. After several years publishing his works mainly in France, he began working in the audiovisual industry as a screenwriter for the animated feature film La leyenda del viento del Norte (The Legend of the North Wind) (1992). Since then he has contributed as a writer for numerous productions and as a director for the film El rey de la granja (King of the Farm) and in the short films Tras los visillos (Behind The Curtain), Perros de presa (Hunting Dogs) and Zeinek gehiago iraun (Who Lasts Longer).