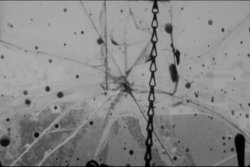 In this first encounter with film, I was seduced by its presence -- tangible, dancing with particles, fragmented and reconfigured on a reel. The spliced shots, if cut by an amateur hand, leave gaps and fissures -- a jumble of moments in new rhythm. They form a topography strung out, visible in motion, spinning before light. To voice this experience with 16mm, I turned to fragments of a different sort. Echoing a documentary practice, I extracted bits from books I was reading at the time, rearranging them into a script. In their new form, disjointed from their original contexts and made linear by my narration, the words of Baudrillard, Calvino, Dillon and Flusser speak to the images and the filmmaking process.

Chloe is a graduate of the combined degree program between Tufts University and the School of the Museum of Fine Arts, where she received a BA in English and a BFA in Fine Arts. She has a background in experimental documentary, but had only worked digitally prior to this project. Chloe currently freelances in documentary film and teaches film history and production in New York City. This piece was made through a workshop at Mono No Aware.

Steve Cossman of Mono No Aware will be available for a Q&A after the screening.